Back to the 90’s… This was our first house in a subdivision in the Treasure Valley. Buying a home while in debt was easy at the time. Thanks F.H.A. 1st time buyer program? Having a home was fun, but this one was no investment. It’s a long story…

Back in 2009, my wife and I paid off the remainder of our student loan debt. We scrimped what seemed like every penny to pay off our loans.  But, the reality was our loans were set for a 10 year pay off after college.  Once one debt was paid off, we snowballed our freed up money to double down on the next loan.  It took fifteen years of our marriage, but we finally did it; I graduated college 5 years after we got married.  We were very responsible with credit cards. We only had one which we used and could earn air miles to Hawaii.  We treated our credit card like a debit card, only purchased what we could afford, and we paid it off every month. 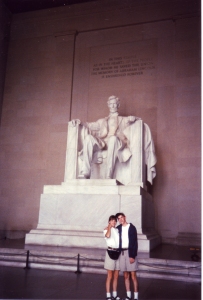 Paid to Play… During our 2nd year of marriage, we worked for a nonprofit that paid us to travel around the country doing multimedia shows. We ended up seeing 38 states and our nation’s capitol. It was a creative way to work together and see the country. And yes, it was the 90’s and we wore socks with sandals.

In our first year of marriage a small student loan of mine almost went to collections because the bank in which I borrowed it from sold it without notifying me.  The new company whom I did not know began sending me mail which I tossed thinking it was junk mail and a scam.  When we realized what had happened, we began paying this small loan off first before my credit rating was destroyed at a young age of 21.  When that was paid, we took that money and applied it to the next smallest amount and paid it off.   Each loan we paid off, we celebrated as a momentous occasion by visiting our local “mom and pop” video store, renting a movie, and making a fancy dinner for two.  Usually, sword fish or halibut steaks, pasta alfredo, and broccoli.  Krista would whip up a nice dessert, and we would have our dinner and a movie and toast with sparkling cider.  We never had much “materialism” in life, but we had each other and the encouragement of working as a team.  Thinking about those past moments, I just really love my wife. 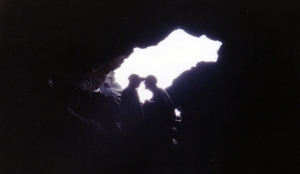 The light at the end of the tunnel (lava tube)… This is was taken at Craters of the Moon National Park. We saw many other cool features during our Idaho vacation. We did some camping and stayed in a couple cheap motels… Having fun and exploring while still in debt at the time, but always making those payments.

Much of our desire to live debt free was brought on by the ever hopeless indentured servitude to the banks for loaning us money for degrees that we could barely afford to pay back.  Our student loans were slightly above 9% when we finished paying them off.  Student loans are a variable loan and adjust their interest rates.  The weight and burden those student loans during our first years of marriage made us vow to be rid of debt one day.  We also read two books, before Dave Ramsey was popular, by a Christian financial advisor, Larry Burkett.  We read his books Investing for the Future (1992) and What Ever Happened to the American Dream (1993).  These two books helped two young twenty somethings to begin the dedicated journey for the next fifteen years to become debt free.  During that time Larry Burkett has passed away, and some of his prophetic words about our economy have come to pass or are on the brink of being fulfilled. 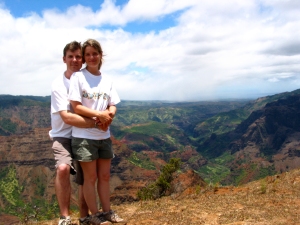 Staying in Hawaii for $6.00 a night… We used the free air miles off our credit card to fly to Hawaii for free in 2007. We then camped on the island of Kauai for a week ($6 a night or $42 for the week) It’s an adventure if you don’t mind camping with the homeless, the down and out drug users of the island, as well as the other brave souls seeing Hawaii on the cheap.   The 2nd week we bunked at Krista’s parents’ time-share.

Knowing our loans would be paid off after 10 years of graduating college was a great motivator.  We never consolidated our loan, thanks to a bank loan officer’s wise and honest advice, so we could pay each one off, one at a time.  Once one loan would disappeared, we would take the now freed up money and transferred it to the next loan, until eventually we were debt free.  Our vacations those first years of marriage were mainly camping trips or visiting family.  We still found the excess cash to see a Shakespeare play once in a while or go out to the movies to see a block buster such as Star Wars or the Lord of the Rings trilogy.  We purchased a used car and made sure our payments were low enough to pay off the car quickly.   We even saved up and purchased a used sailboat and pickup truck. We had fun even when we scrimped and saved, lots of hiking and biking.  There is so much available to do out there that doesn’t cost a ton of money and a mocha every now and then won’t break the bank.

Home sweet home… Relaxing around the fire on a nice evening at home. Making our home our favorite vacation destination.

I just wanted to encourage you that there is a light at the end of the tunnel.  My wife and I desired to purchase a small acreage and build an off grid home back in 2005, but we did not achieve the dream until we broke ground in 2011.  Having dreams and goals is what drives us, and it is an incredible joy to celebrate each goal achieved, especially the small ones.

If you had a vacation or fun activity you found on the cheap, please post it here, so others can be encouraged and find new ways to have fun while freeing themselves from their debt.

Ammo Can Panniers for a Bicycle